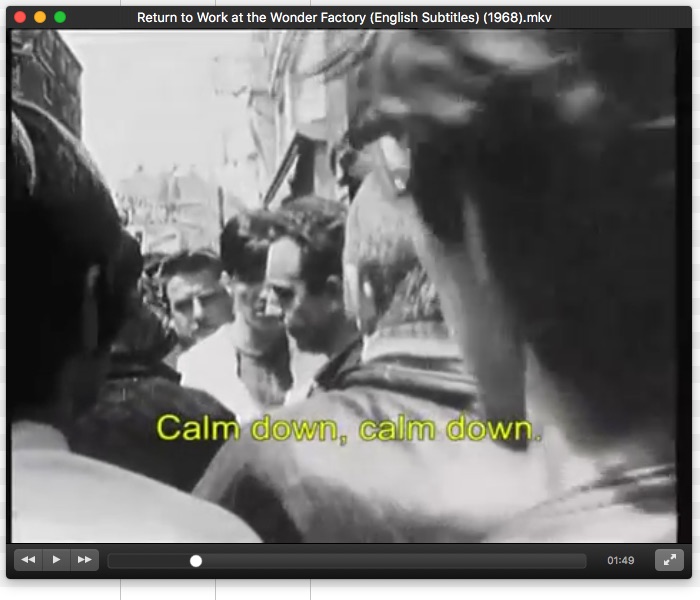 The Re-uptake of Labor

Filmed on 10 June 1968 at the entrance to the Wonder factory (light bulbs). We see a single woman, in a large gathering of men, the moment which, after the strike of a thousand events in May '68, everyone is supposed to go back to work.

The voices of reason, embodied by the male functionaries of uprising, remind the woman of the small concessions they have been offered, also the possible concessions with regard to an indefinite future, the potentiality that lies in the events of the strike itself, and so they ask for adjournment and await a concession from her in return.

But she doesn't want to. She doesn't want to go back. Her "emotionality" in the face of what she is so bad at "mediating" with "reason": that this situation here, the ordered return to the dirt of the factory, is about her life, which in the moment of the interruption of everday sameness had opened itself up to her, in a completely different projection, towards completely different forms of production, maybe even the opposite, an end to permanent production - that makes the men around here visibly uncomfortable. And that's how hands end up on shoulders.

There also appears a man, the figure of The Young Man, who is ready to face the camera discursively, which means properly. This doesn't disturb the sequence, in the film she will now disappear among the talking heads and bodies, he keeps playing on the predefined territory. More men follow who will always be right, also in their life after the film, but they will never find justice, and then they'll be wondering why the one they keep talking at, whenever they are in the right, always reacts so "hysterically". Even though hysterical, that's only and exactly what they are themselves, as they exploit every possible situation to perform forms of speech (almost always ideological and almost never spoken from experience) that, without consideration for losses, maximize their own profit.

Of course, May 3 2020 is not just literally about the return to the factory. Because the factories of the 21st century, the logistics centers for example, are still hives of activity. On May 3, 2020, what she doesn't want, what she doesn't want to return to, is the fabrication of life. The return to a fabricated life that is not only unsustainable and irresilient, but also mendacious and violent and boring and false, unbearable not just a vision of the future, but unbearable now, in every moment. The ecological crisis of capitalism is merely the sum of billions of individual ecological crises, of individual lives that have become too abstract and careless and miserable and uncontinuable: a global desaster that is bearing your name. That has been going on forever, and that will continue with certrainty, while we're busy figuring out who is at fault, and carry out wellness therapy against corona in social separation, without a practical critique of separation.

And in the case of the Germans, who are already celebrating themselves as Weltmeister of Coronabewältigung,(1) May 3, 2020 is all about cautiously ramping up export production again, to make sure the virus doesn't cause a true catastrophe. That means car production, and everyone will be ordered to drive to Rimini for holidays, just like in the 1950s. And in this respect, the reprise du travail is not only about the labor of life and its reproduction - in the kitchen, by the stove, in bed and on zoom - but also about the fabrication of death and destruction. The Germans owe a large portion of their their prosperity to the production of a machine that kills over three and a half thousand people every day, nearly one and a half million per year, and these are people whose sudden but still often miserable deaths are already priced into German prosperity, including the five thousand Euros of free money for freelancers, by which the Berlin Senate puruses its clientele policy that promotes: "Keep it up!" and "Carry on as if nothing happened."

And she'd rather not. She prefers not to.(2) And that(3) remains our house,(4) and finally throw the cars out of Kreuzberg, and if that doesn't work out then throw out the Greens and the Left and the Social Democrats.(5)

(1) World champions of "coping with corona", derived from the noun "Vergangenheitsbewältigung", "coping with the past", which is the term Germans use when they celebrate their victory over the holocaust, the fact that they've managed to cope with it. The verb "bewältigen" means "to successfully deal with" a workload, or "to overcome" a difficult task, but clearly there is "Gewalt" ("walten" means to govern) and "überwältigen" in it, to overpower a victim in the moment of arrest or assault.

(2) Melville, Bartleby (the last consensus concept persona of the radical left, or at least of Diedrich Diederichsen and friends, which includes piratecinema)

(3) The end is a quote from one of the most famous Ton Steine Scherben tracks, "Rauch-Haus-Song",(6) about the occupation of Bethanien and the cops on Mariannenplatz: "This is our house! Throw Schmidt und Press und Mosch out of Kreuzberg, finally!" Schmidt and Press and Mosch were representatives of the real estate mafia who at the time were constructing the NKZ (Neues Kreuzberger Zentrum) at Kottbusser Tor, which was finished in December 1972. Lead singer Rio Reiser would later pursue a solo career, see "Junimond".

(4) "That remains our house" refers to the "House Bartleby", the name of the allegedly former leftist association that in 2020 initiated the nazi demos at Volksbühne. The "House Bartleby" is where the Tocotronic-Left(7) - who we have to thank for the lie of the "Querfront"(8) on Rosa-Luxemburg-Platz,(9) and who always just wanted "to be part of a youth movement",(10) no matter for or against what, or if at 17 or as pensioneers - has, hoping for hard times, holed itself up.

(6) "The double album Keine Macht für Niemand ('No power for no-one') was released in 1972 by rock band Ton Steine Scherben. The track "Rauch-Haus-Song" describes the scenes when the police attempted to evict the squatted Georg-von-Rauch-Haus in December 1971. Members of the band were involved in the squat and were present when the police attacked. A derelict nurses' dormitory, part of the former Bethanien hospital, had been occupied in early 1971. It was one of the first buildings to be squatted in Berlin. The squatters had renamed the building Georg-von-Rauch-Haus after Georg von Rauch, a leftist who was shot dead by the police on 5 December 1971. The police action was unsuccessful and the Georg-von-Rauch-Haus remains in existence almost fifty years later. Within the German squatter movement, the "Rauch-Haus-Song" became an anthem, with the refrain 'Das ist unser Haus' (This is our house) being shouted out as a motto." (https://en.wikipedia.org/wiki/Rauch-Haus-Song)

(7) The founding pamphlet of "House Bartleby" prominently refers to the German band "Tocotronic" - which piratecinema strongly dislikes - as a witness for lazyness as a political strategy. Singer Dirk von Lowtzow attained nationwide semi-prominence and is, among other things, a Texte zur Kunst regular.