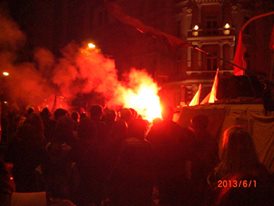 When I saw the "10 Preliminary Theses on Trump" (1), what made me feel uneasy was, mostly, a matter of form: that the "10 Theses" format seemed strangely anachronistic, inadequate for a phenomenon like Trump, and that of all the attributes one could have possibly picked, "preliminary" looked like the least appropriate choice for something written in late January 2017. The most famous (and most famously wrong) "N Preliminary Theses on Trump" text, Nate Silver's "Donald Trump's Six Stages of Doom" (2), was published in August 2015, and that was the time when it was still possible — reasonable, as Nate Silver would argue — to think that "preliminary" might do. That has changed.

Reading the "10 Preliminary Theses on Resistance" (3), I'm sure that each of them is built around a kernel of truth, but I found it hard to get through the coating. To me, they sound overly romantic in the best case, and ring like pure kitsch in the worst. Romanticism may have its place in political critique, but here, it seems to come at the cost of making actual observations, at the expense of material reality, and how stuff in it actually works.

So short of making 10 anti-theses (which would be a real waste of time), let me point out just the most glaring examples:

Re 1: Resistance against Trump has already become manifest, not as radical acts of negation, but as diffuse articulations of discontent. The resistance is in the streets already, attracted not by pure negativity, but by Facebook events. That's the "gasoline for the fires to come" (and can we update that metaphor for the 21st century, please?).

Re 4: I'm vaguely aware of how historians and philosophers have, in the latter half of the 20th century, attempted to locate the notion and frame the question of "power". It's always good to try something new, but here, the use of that concept seems more like a regression. I always thought statements like "power is most intimately known by those who have lived their lives beneath it" were no longer possible, and that "those who have historically been most affected by power" no longer populate our fantasies.

Re 5: "As lines of riot police and make-shift barricades cut the world into a billion different sides", I have difficulties tracing the very geometry of that phenomenon. "Which one will you stand on?" Statistically speaking: nowhere near any of the edges, and most likely alone. And when "ultimately", we wipe the board clean, and a single "line will be drawn between those who currently (or seek to) govern, and those who desire to be and insist upon being ungovernable", then can we please also drill a hole for those who insist that becoming ungovernable contradicts the very notion of drawing such a line?

Re 9: I don't think anyone doubts that "the crisis has already arrived", and that it arrived around the same time when the idea that there is "no possibility of rolling back time" was elevated from wild guess to scientific fact, or when the observation that "the sheer entropy of the present means that there is little to hold on to" was reformulated as the Second Law of Thermodynamics. The crisis is old news, really. What worries me more, however, is that the above is then immediately followed by the prediction that "watching the world around us rise and fall at an accelerating rate, those who prevail will be those who grasp the risks worth taking", because I can't shake off the feeling that I have read that before, even though I cannot remember where. Is this still Kevin Kelly, or already Peter Thiel?

And so on. The good news is that none of the above matters much, since there is and will be resistance, and it must succeed. It may lose some time, trying to define "success" and "failure" and mapping the vast space that lies in between, but at some point soon, it will have to define a number of practical goals, and do all it can to achieve them. If it disregards the "10 Theses", that's fine, but even if works out exactly, word-by-word like these theses propose, then tant mieux.

One more thing though. I don't personally know very many people who have been in an actual resistance movement, but I have a few friends in Cairo, and they did it: not only sustained the resistance against its many adversaries, but actually brought down their government, which is what we usually call a revolution. (And yes, today we have the privilege of knowing how it played out.) I used to listen to them a lot, and not only heard a few things about streets and movement and tanks and projectiles and rape and sharpshooters and night vision and food supplies, but was also reminded of what I think the "10 Theses" attempt to allude to, which is the life-changing experience of taking part in a protest: how a small series of minor events can be sufficient to gain the offensive over the state (its police or army or hired goons), and what happens when the full force of what is normally not leaks into that vacuum, how the "other worlds that are possible" immediately realize themselves in the capillaries of the social. For those who have lived it, this is usually a point of no return, and even though from all I can tell, you're still more likely to die from a gunshot, or depression a few years later, than to sustain such a liberated social for long, this experience is an essential part of how you become ungovernable for good. "Theoreticians who examine the history of this movement from a divinely omniscient viewpoint (like that found in classical novels) can easily prove that the Commune was objectively doomed to failure and could not have been successfully consummated. They forget that for those who really lived it, the consummation was already there." (4)

But since then, 2011, I have made it a rule to not write anything about resistance or revolution that any of these Cairo friends — and they're not fighters or revolutionaries, they're just friends — might take as an insult (extended to include everything that might make me look stupid). It's a good rule. And even if you don't know anyone in Syria or Bahrain or Kashmir, you know that these people exist, you can imagine them being your friends or your readers, you can pretend to be in a conversation with them. Think of them when you write.